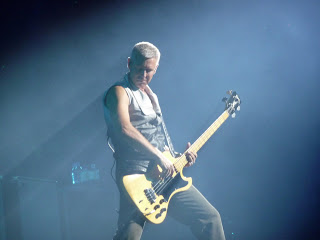 We (Ajay, Nadeem, and Lorie) queued up in line for 33 hours before seeing the first U2 for their new tour. We were able to split up and leave for 2 hours each to go back to the apartment to shower and get food. So it wasn´t that bad. As expected, I saw the usual diehards in the queue and met a few new friends who I was able to hook up with tickets for shows they were unable to get. Sleeping overnight wasn´t bad and the queue itself was well administered. It wasn´t until they opened the gates and started scanning us did it go crazy. My entrance was a little further away, and I have never had to sprint as far as I did for that show. It wasn´t as easy a sprint as Vertigo. Now that I´ve done it, I am familar with the route. I made it to 3rd row in front of Bono. Pictures to be uploaded soon.

Snow Patrol were awesome. I reckon the Dublin crowd will be much more enthusiastic.

Intro song, I didn´t know what it was, but it was a good one. Then there was a kind of soaring Gregorian chant while each member walked onto stage – electrifying!!! The song was called Soon, which was supposed to be on the non-released album Songs of Ascent.  Then the chant goes straight into Breathe. I was surprised at how good of an opening song it was. I always thought it would be Magnificent, but Breathe was a nice surprise.

No Line on the Horizon – everyone in the pit sang along. I initially didn`t like the slower version, but have a much more positive opinion after seeing it live. Bono was on his Goal is Soul guitar.

Boots – great intro. Much better live than on the album.

Magnificent – Amazing sing along. What can I say. It was spine tingling when 90,000 Catalans sing ´Magnificent´.

Beautiful Day – different intro than past intros, I approve. Of course, it has become a staple and everyone knows the words.

Still Haven´t Found – Full electric version. Another great sing along. At this point, I was taking a lot of pictures (which I will post soon)

Angel of Harlem – dedicated to Michael Jackson. The cover of Man in the Mirror and Can´t Stop Till I Get Enough was a lot of fun!

Little While – full version, great to hear back in its original form. Everyone went nuts when the lyric ´a little girl, with spanish eyes´was sung!

Unknown Caller – my favourite performance of the evening. They had the chorus lyrics on the screen and everyone sang along, especially lud was during Óhhhhh, Ohhhh

Unforgettable Fire – wow wow wow. Perfect rendition, sounded as though it was 1986 and Bono´s voice was spot on. What a treat.

Blinding Lights – one of my favourites, everyone pumped their arms during ´oh you look so beautiful tonight´

Vertigo – okay, it´s pretty cool when ´uno, dos, tres, quatorce´ is sung in unison in any stadium, it´s a different world when it is yelled out in Nou Camp, Barcelona, Spain. I was awestruck.

Craxy tonight – when we heard it outside of Nou Camp during their full dress rehearsal, I thought it sounded crazy. But when you SEE them perform, especially with Larry walking around the catwalk with bongos, and the massive visuals, the song takes on a festive atmosphere. This is a song enjoyed in person.

Sunday Blood Sunday, and Pride – two staples where everyone knew the lyrics. I still can´t get over how loud the Catalans were. I thought Italians were loud, but I was prooved wrong last night.

MLK – this was icing on the cake to add on to Pride. Someone threw a Martin Luther King banner on stage while Bono dressed it on one of the speakers.

Walk On – full version, everyone was encouraged to where their Ang Sun Suu Kyi facemask which was handed out by staff while entering the pit area. I dropped mine because I thought it affected my sprint to the front.

Streets – after the Desmond Tutu speech, the Streets organ intro crescendos into the song. I really like it.

One – The band are off tempo and had to restart it. That was the thing about seeing the first show, was their commentary and efforts to iron out kinks.

Ultraviolet – amazing. Bono came out with a jacket with red lasers on it. Rather strange, but I guess appropriate for the song. Although, does red reach the ultra violet spectrum?

With or Without You – Bono sings and swings from a hanging microphone. Very interesting. I always love it when this song is played live.

Moment of Surrender – my favourite song on the new album. Bono asks us to sing to this ´beautiful´song. So everyone belts out Óh oh ohhh ohhh ohh ohh´over and over. Great on the album, out of this world live.

Okay, gotta head to the queue for the second show!!!