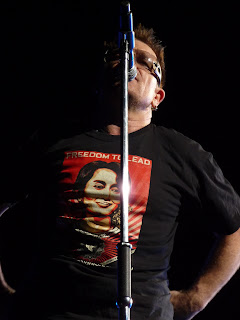 Seat: General Admission – Front Row Centre
The last show of 2010.  The show I did not want to miss.  This tour, I’ve developed a habit of attending the openers and/or closers of each leg.  I was there when U2 360 opened in Barcelona, and again when it opened in North American in Chicago and when it closed in Vancouver.  Having missed Europe 2010, I couldn’t go without seeing the band this year, which is part of the reason I came to Australia, particularly Perth where it closed off the Oceana tour.  I also will be in Mexico City when U2 resumes the tour in North America and will be there in Pittsburgh where the tour will apparently close.

The queue for Perth II was easy going.  It was nice to see Jillana there.  She is one of the famous ‘three sisters’ that Bono refers and sings to at every show they’re at.  I first remember them at the Madison Square Gardens New York Vertigo show (October 8, 2005).  I saw them again four years later at the Phoenix and Las Vegas shows.  Similar to seeing Cathal on the tour, seeing familiar faces keeps a certain constancy to the traveling and touring, which makes me feel more at ease.

Unlike the day before, it was a run into the venue.  Security didn’t seem too concerned.  Although I was 21 in the queue, I made up valuable ground on the run and made it in first.  It wasn’t my fault!  When I broke away to the left from the group, I saw Chris and a few others break into a run.  I didn’t hesitate, and sprinted myself.  I love those moments – the rush, the adrenaline, and the satisfaction.  In the end, all the people we queued up overnight with all made it to the front.  I was happy, they were happy, and the the crowd was ready.  I was beside Kara and Jo during the show, and it was an honour to be at a concert with U2 veterans.

There was an obvious festive mood in the air, and was cued by Bono singing a bit of John Lennon’s ‘Happy Christmas (War Is Over)’.  Everyone sang along, and I loved it.  To make the night even more special the band sang a trio of Rattle and Hum songs – All I Want Is You, Love Rescue Me, and Desire!  Desire was a very pleasant surprise, taking me back to that  Barcelona show when the stadium would sing along that anthem of a song.  I lost it during ‘I Still Haven’t Found’ when Bono soliloquized that if we’re still on the important journey, that it doesn’t come to quick – as though there is virtue in the struggle itself.  I then thought of my family, who I was spending Christmas away from for the first time in my life.  The song touched me at a deep level, where my faith, family, and friends are at my core.  U2 has that effect on me (and most of us for that matter).  I have to admit, I go to so many shows, that coming across that special effect has become more rare.  Perhaps it’s a function of knowing what to expect in the setlist, so that’s why it’s a rare thing to experience a spontaneous moment that sparks that special effect I yearn for.

The loud fan beside Kara was yelling to Bono to sing ‘Party Girl’ just after ‘With Or Without You’ finished.  Uncomfortably, Bono acknowledged the fan, turned to the Edge who shrugged an I don’t know, it’s up to you look.  Bono then turned to Larry who immediately wagged his head no.  It’s clear who wears the pants in the band – it’s Larry!  As a compromise (and perhaps because he’s not as familiar with the lyrics at that moment), he sang a few lines from Party Girl, with the rest of the crowd filling in the words.  It was indeed a festive concert, with only 6 days before Christmas.

After the show, I was sad to part ways with my Australian friends, but hold hope that I will see them again on the tour.  With the four shows out of the way, I could finally and totally relax and enjoy my vacation :)