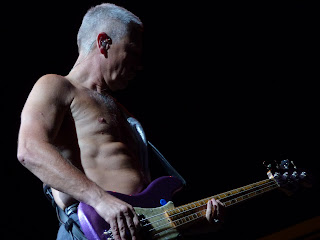 When I thought Sydney I was hard to top, the second night was even more magical.

Right after Sydney I, I went back to the queue to get my number (#21).  It was an easy overnight sleep in the queue due to sheer exhaustion.   The next day, I had the benefit of being lined up at gate F and the shade of the ANZ stadium during the hot afternoon.  I often found myself trailing back to gate J to chat with the friends I met the day before.  I met Kara, from Adelaide I believe, and would be beside her at the Perth II show later on.  The day before the gate I was situated at – gate J – opened first.  Today, gate F opened first, so I considered myself really lucky.  I made it in first along with Jana, who was let in and accompanied with security earlier because of her fractured foot.  Despite the limited views of the light show, I really love being front-row-centre because of the unobstructed sight lines and interaction with the band.  The energy up front is contagious as well.

Jay-Z was a great opener as far as I was concerned.  Many U2 fans may disagree, but I think it’s just a disagreement over genre than by the artist himself.  I’m a fan of rap and hip-hop, so I was pleased to get Jay-Z.  I vividly remembered his set at the Pemberton Festival in 2008 when he performed right before Coldplay who was the headliner.  The real jewels of the night were hearing ‘All I Want Is You’ (first time performed since the Hawaii show in 2006), and ‘Love Rescue Me’ (which hasn’t been played live in over 20 years!).  I was ecstatic!  You can see the band struggling a bit through Love Rescue, with Bono encouraging them to pick up the pace.  I loved every second of it.  I filmed the two songs and will put them up on Youtube when I get a chance.  Later in the show, for some unknown reason Adam took off his shirt during the performance, much to the delight of the female fans. Such spontaneity makes U2 concerts special.

I left the concert delighted.  Although it took a while to make my way back to my Aunts via the slow trains, I had two more shows in Perth to keep my U2 high going.