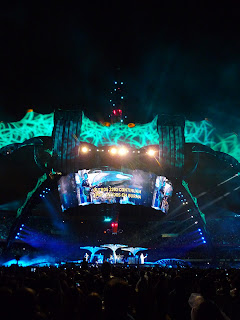 This was the first time I did general admission but wasn’t along the rail. I had taken an overnight flight from Edmonton (via Toronto) to São Paulo and got there on April 9 – the morning of the concert. Jana’s brother, Antonio, and Cathal had picked me up from the airport. Exhausted and need of freshening up, they drove me back to Antonio’s flat where Marty from Holland (who I met back in Perth) was also staying along with the rest of us. We then went to Morumbi Stadium to see Jana and Colleen. By the time we got there, there where there were tens of thousands of people already queued up! We met up with Amp (who I met at the NY Vertigo show) and lined up with him in front of 10,000 people in front of gate 18 (there were 3 gates). I have never seen so many people queue for a U2 show by mid-afternoon!

Amp and I were resigned to hang out at the back of the pitch near the soundboard – famed for its superior sound. To be honest, I couldn’t tell the difference. I yearned for the front, but couldn’t get here in time to line up early with Nick (from San Fran), who arrived at the queue 4 days earlier.

The show itself was awesome. I hadn’t heard the opener – Even Better Than The Real Thing – on the bootlegs of La Plata. I’m glad I didn’t because it was explosive! I couldn’t get the song out of my head the whole night. It was an amazing opening song to the concert. The remainder of the set list was not that different from what we heard in Australia. Happy birthday was sung to Jullian Lennon, and it was nice to hear Fez – Being Born mainly because it reminds me of when I visited Fez in 2008. At the end of the night, we met up with everyone else – Jana, Colleen, Marty, Cathal, and Amp to grab a much needed drink and some food. I was thinking of heading straight into the queue for the next evenings show, but it was still raining and fans who didn’t attend night 1 had queued up four days earlier for night 2. Apparently, a U2 fanclub in Brazil had organized wristbands and were fiercely territorial of their space. Given that I didn’t speak Portuguese, I figured it would be difficult to assimilate myself into an established queue that night. I decided to put all my eggs in one basket and ensure I get to the front for night 3. In the meantime, I got much needed sleep that night to prepare myself for Sao Paulo II.

Here are all my pictures from this show.
The bootleg recording is available here.