Right after the second show on Saturday, Brad and I went back into the queue for the third and final concert of Mexico City.  It had been an incredibly long week, and I found it hard to measure up with the Latin American fans who queued up for over a week for their show(s).  Unlike European, Australian, and Anglo/French American crowds who only line up for usually one night, the Latin Americans can stretch it out for a long time.  Some explained to me that it was because they saw U2 as their Beatles.   Others stated that queuing up for long periods was part of the culture and expectation of concert-going.  A more plausible explanation given to me was that U2 doesn’t visit their countries very often, so lining up for a week was worth the effort.  For us in Canada, United States, and Europe, we are spoiled to see U2 on two separate legs on the tour.  For most Latin Americans, this was their one shot to see the band.

It was a bit disheartening to know that the large amount of time I invested in the queue for the first night produced marginal returns.  I had to camp for four nights just to be number 239!  One thing I learned from my previous Brazil experience, as a foreigner, it made the most sense to invest the effort for the third and last night to get near the front.  By the third show, most local fans are already tired from being in line for over a week.  Some fans did not conceive of going to multiple shows.  While others who did see the show from a previous night might enjoy the show in seats instead of the GA.  For us few traveling overseas fans, to maximize our time in the queue to be near the front, sacrificing our bodies through a yet another night on the concrete paid dividends.  I ended up being number 71 for the third show.  Brad suggested such a method as “powering through” the night.  Cathal thought we were “nutters”.  Both friends are right.

Needless to say, I had a brief and uncomfortable sleep in my survival bag on the concrete.  But the sheer exhaustion helped me catch a few hours of rest.  The next morning, there were certainly less people lined up in the queue. I ran into my fun Spanish friends from Valencia and Canary Islands.  They always crack me up, and gave me a hard time for not being in Europe during the 2010 tour.  I’ll see them again later in Montreal and Moncton.  As the last two standing from our group, Brad and I were able to make into the venue front row centre.  The first 60 or so Mexican fans ahead of us had converge in the middle of the pit (in front of Bono), leaving a little space to the centre left for Brad and I to enjoy the show.  I felt very lucky to make it to the front with such a dedicate and passionate crowd around us. 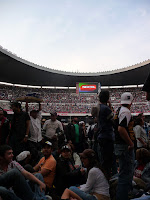 We  got to know the fans in the first group who were let in, and they embraced us right away as foreigners.  Luckily, Brad spoke Spanish, and that helped break down and barriers between us and the locals.  I absolutely loved it whenever someone tried to break into the area where we were sitting by yelling out fuera (out!).  It kept the group together and disallowed late-comers (people in the 1000s or 2000s) from jumping the queue.  Another lesson I learned about the GA queue, fans are very territorial of their spot.  One from the United States even threatened to “break someone’s kneecap” if they passed her on the walk in to the pit!  A bit extreme and brash, to be honest, but the territorial attitude was evident. 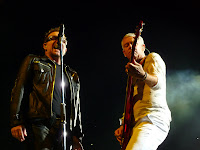 After a five hour wait in the pit, and an emotional sending away of Snow Patrol (it was their last show of the 360 Tour), U2 came on to a sold out crowd of over 111,000 screaming fans.  There were quite a few highlights to this show.  A full version of All I Want Is You was performed, with Bob Dylan’s Worried Blues added at the end where Bono confesses that he drank a little too much tequila on his birthday.  During the song, a fan right behind us was begging for water, and the security refused to give him anything to drink and told him he had to leave the pit to get water himself!  Unreal.  In desperation, and with a bit of hilarity, the fan tried to appeal to Bono during All I Want Is You by gesturing for water.  Needless to say, Bono was too involved with the song to see the fan’s appeal for something to drink.  It was a sad, but funny moment.  Some fans literally do see Bono as their saviour!

This scene was followed by Love Rescue Me, another rarity of a song to be played in its full version.  I see a lot of shows, and it’s moment likes these when a rare song is played that makes the concert stand out.  I’ve been lucky to hear Love Rescue Me at the two other shows they played it in Sydney and Perth, Australia.  It’s a great sing-along-song with lyrics that resonate well for those who struggle with their faith. 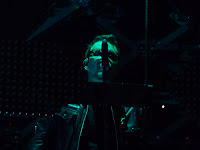 Zooropa, of course, was outstanding.  On a technical note, you may have noticed that the screen comes down so low that it covers most of the band.  Because of it’s metallic structure, it must cause some interference with the microphone transmission.  I noticed the band techs slipping huge portable receivers for the Edge and Bono under the screen to pick up their signals.  I’ve always wondered why my cellphone signals are always poor when I am at the front.  The big massive screen may be the explanation as to why I can not tweet or make too many calls when I am there. 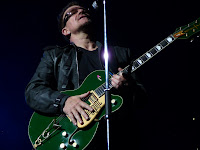 It was raining pretty hard while we were waiting in the pit.  Under such stormy conditions, there is usually a rain reference in the show.  After One and before Where the Streets Have No Name, Bono sung a bit of Radiohead’s High and Dry.  It was a bit emotional at the end, and it was clear that the band were having a lot of fun during the show.  It was the last show of the Latin American leg, and it was rather appropriate that the pit began to sing Cielito Lindo Huasteco.  Picking up the festive mood, Bono chanted, “Ay, ay, ay, ay…” and the entire stadium sung the remaining chorus, “canta y no llores, porque cantando se alegra, cielito lindo los corazones…” Electrifying.

My photos from the show are available here.