My friend Chris (from Winnipeg) and I had arrived at Commonwealth Stadium Tuesday morning.  My friend Cathal, from Derry, Ireland, stayed at my place that evening, so Chris and I decided to go the the venue early and crash there instead.  Stefan (from Calgary) joined us in the queue at 4:30AM, before security rolled up to talk to us.  Thinking that we were in big trouble, they surprisingly asked if we were okay and needed any coffee or hot chocolate!  What a kind gesture!  Later, Barry from U2/Live Nation approached us and assured the group we would be taken care of as we were in Vancouver.  I was relieved knowing we had the full support of the security staff. 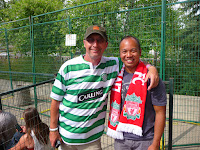 I met a number of fans from the Winnipeg show who came over to Edmonton and I was happy that we had such great company in the first section of the queue – Samantha and Scott, Sarah, Anna, Anton, Dino, John, Heather, Danielle, Dawn, Robyn, Ernesto, Dave, Melissa.  It was also good to see other familiar faces such as Tony from Toronto, Kathy, Nuno, Kim, Makiko, and Tim.  I never feel like a stranger to these shows because there is such a strong contingent of travelling U2 fans from around the world.  I met quite a few new people while in the queue, which made the experience all the more amazing.  I’m sorry if I can’t recall all your names, but believe me, I enjoyed everyone’s kindness.  To me, the meeting and community of U2 fans in the queue is what makes the general admission and U2 concert experience to be the focal point.  If this was a movie, the events in the queue are the main sequences in the film, and the show itself is merely the concluding shot.  We shared food with each other, coffee and water was adequately supplied, and looked after each other over night.  One fan gave me a t-shirt with some inspiring words from Eisenhower regarding poverty reduction.  Stefan was kind in had given me a Liverpool jersey – we’re both LFC fans.  As many times as I do the GA line, I am always blown away at the generosity and kindness of fellow U2 fans.

One of my favourite memories of the queue was meeting Julio the day before the show.  He recently moved to Edmonton from Mexico and was working in a hotel.  After coming back from the Mexico City shows and being welcomed by some wonderful people in line, I held a strong affinity for Mexican fans.  Julio English was laboured but sincere.  He was desperate to find a GA ticket and was willing to pay a little more just to see his favourite band.  I assured him that fans often have spare tickets who are willing to sell their tickets at face value, and I would let know when a ticket was available.  The next day, I met Wayne who was a very generous fan.  Not only did he hand out free Starbucks sandwiches to people in the queue, but had a spare GA ticket!  I called Julio the morning of the show and excited breathes of “Gracias! Gracias!” echoed from from my cell phone.  I later saw Julio in the pit when I was walking around and gave him a thumbs up.  The big smile on his face epitomized what the GA was all about.

While some members of the general public may scoff and judge us, they totally misunderstand the larger experience of the GA, which is the development of social trust and the building of community.  As a result of the shows I’ve been to, I have a wide network of friends from all walks of life who I can trust, rely on, and approach in any part of the world such as Australia, USA, England, Spain, Brazil, Mexico, Croatia, Poland, and Ireland.  I am a better person because of the friends I met in the GA.  If people judge me poorly because of my extensive travels around the world and finding a common bond through U2’s music, it is because these anonymous critics in the “comments” sections of newspapers have led isolated and non-cosmopolitan lives.  Plato would have judged these denigrators as having never left the caves and failing to realize that the shadows they see is not reality at all.  There is a wider world out there.  For me, U2 concerts is merely a vector to travel the world and meet new and interesting people. 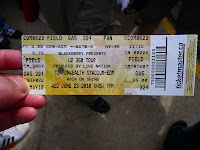 The duration of the queue was, for the most part, well managed.  There were no major issues of fans discontent in the line.  It wasn’t until the opening of the gates when all disorder broke loose.  Three major problems arouse – as a direct result of the incompetence of the day-of-event staff.  First – faulty scanners.  The venue opened up 7 ticket gates.  The ticket agent failed to scan my ticket several times.  When I demanded to be let go to go to a different scanner, he refused my request.  Dozens of fans flew past me.  I was irate.  Finally, the agent let go of my ticket.  I went to a different scanner and the ticket was processed fine.  I yelled at the previous scanner, “It works!”  Second – unclear passage to the floor. The original instructions of going down section M seemed to have been false, and were led in a wild run down section F.  Seeing that my passage down the stairs was blocked by others, I skipped down the seats to bypass everyone in order to get to pitch level.

Third – blockage of one side of the cattle gates into the pit.  Looking ahead, I saw that the entrance to the inner circle was being chocked off by staff who wrongfully thought their entrance was only for the Red Zone, when in fact it facilitated both GA and Red Zone ticket holders.  Scott had to correct the the staff with their own maps in order to get in.  Seeing this blockage, I ran to Edge’s side to get in, and required running past dozens of people to get in the pit.  I was furious at the staff’s lack of coordination and management of ticket holders. 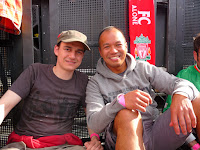 After the ticket scan fiasco and pitch security incompetence, I have to thank Stefan and Chris for saving a spot for me at front row centre. I had always known that a number of variables can come into play that can make the GA experience less desirable. But a failed ticket scanner, no direction onto the pitch, and closed off gate at inner-circle level, is a triumvirate failure for the venue staff.  It was such a contrast to what we encountered while in the GA outside of the venue when the security staff were accommodating and helpful.  We did our job as fans to be orderly prior to being led in, but the day-of-event staff were utterly incompetent.  I know I sound scornful, but it left a rather sour taste to our mouths after the monumental effort of assuaging the concerns of fans waiting to get in, and keeping everyone lined up.

Nevertheless, without my friends’ help and presence, I wouldn’t have enjoyed the show as much.  My boss from the Edmonton Social Planning Council – Susan – was at the show a few rows back from us, but the fans around me were kind enough to let her join us.  My friend Alastair was also a part of our group, and I was happy he was able to enjoy the show for the first time.  Katie came a little later and was able to hang out with Jason and his girlfriend in front of the Edge’s section.  I was able to walk around the pit easily and see how everyone fared.  It seemed everyone was content with their spots.  I ran into a group of female fans who were also following my blog, and it was nice to feel welcome in the pit.  For all of us, this was home for the next 5 hours.

Unlike the Winnipeg show where I had nothing to prove because I had the unconditional support of my close friends and family, I felt a little more pressure in Edmonton. I had a lot of new friends and colleagues who knew I was a U2 fan, but they had never seen U2 live before or for a while. I raised expectations about the GA experience and U2’s performance, and hoped that it would be a good show.  Some of these Edmontonian friends were in the GA, while others were in the seats.  I was praying that U2 would live up to their hype.  They didn’t disappoint.

U2 were on fire that night. I felt it was a better performance than Winnipeg, primarily because it was gorgeous weather outside. Bono connected well with the crowd and the rest of the band was set into high gear. Adam was smiling and bouncing around, the Edge was electric, and Larry was his usual stoic self.  Bono was particularly energized and unloaded several jokes and stories that narrowed the distance between the fans and the band.  The now infamous ‘hitch-hiking‘ story was verified by a fan I met at a bar (The Pint on Jasper) after the show, whose cousin was in the vehicle that picked up Bono in West Vancouver. 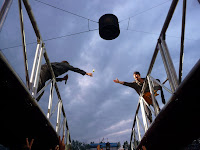 The musical highlights for me were the opener – Even Better Than The Real Thing, the return of the video sequence to Magnificent, Zooropa (although it was disappointing that the screen did not fully come down, and that we did not see them wear those cool lighted jackets), Bono’s solo performance after One – Carole King’s Will You Still Love Me Tomorrow?, and the dedication of Moment of Surrender (favourite song) to the folks from Slave Lake who had lost their homes in the disastrous fires.  The lighting of cell phones at the end of the night is always a heart breaker, because it marks the end of the show. 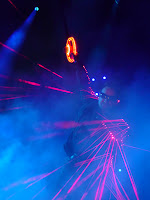 I’ve currently seen 27 shows on this tour, and I have to remember what the ‘average fan’, or an audience member who has only seen this one show, must think of the concert. The newspaper reviews are unsurprisingly positive, and I’m happy that most people walked away impressed by the performance and charisma of the band. I really enjoy taking first-timers to shows, because they get to finally be absorbed by the enchanting music and breathtaking performance of U2. It is at a U2 concert where I have developed a reservoir of happiness. But happiness is only real when you share it with others. It is a real joy to bring friends and family to these shows because they get to be captivated by U2 and share in my happiness.

All my concert photos are available here.