Setlist: Even Better Than The Real Thing, The Fly, Mysterious Ways, Until the End of the World, I Will Follow, Get On Your Boots, I Still Haven’t Found What I’m Looking For – The Wanderer, Stay, Beautiful Day – Space Oddity, Elevation, Pride, Miss Sarajevo, Zooropa, City of Blinding Lights, Vertigo, I’ll Go Crazy (remix) – Discotheque – Psycho Killer – Life During Wartime, Sunday Bloody Sunday, Scarlet, Walk On – You’ll Never Walk Alone, One, Amazing Grace – Where the Streets Have No Name, Hold Me Thrill Me Kiss Me Kill Me, With or Without You, Moment of Surrender, All I Want Is You

Comments: U2 plays Nashville for the first time since Dec. 1981. Bono sings a bit of The Wanderer with Edge playing quietly as he sings. It’s the first time the song has been sung at a proper U2 concert, and was only performed once before – November 2, 2005, as part of a TV show taping in an empty Staples Center. At the end of the show, Bono brings a blind fan on stage who wants to play a song for his wife. The fan gets Bono’s Gretsch ‘Irish Falcon’ guitar and starts playing All I Want Is You as Bono sings along. The rest of the band eventually joins in for a magical moment. When the song is over, Bono gives the fan the guitar to keep. Carrie Underwood, Michael W. Smith, OneRepublic and many other artists are at the show. 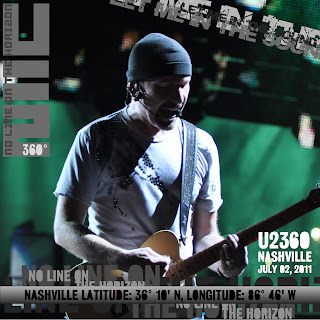 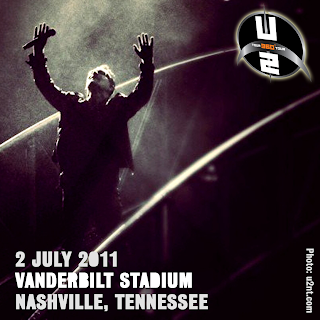