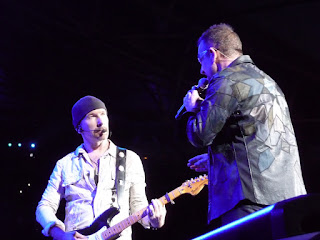 This was my last U2 360 show for the first European Leg. I took the earliest Tube that was available and got to Wembley by 6AM. Adrian and Karina where in the F-Gate queue already. I was number 16. My British friends were at the B and C-gates queue, so I wasn’t able to hang out with them. Some people in the queue, like my friends Andreas, Lia, Nick, and Bronwyn, weren’t able to pick up their tickets until 11AM, so they had to split up between the lines, with the intent of having lower numbers in the queue. After learning how Wembley worked the day before, I was well prepared. F-Gate was let in a few seconds earlier, and Adrian and I got through very quickly and got to the front first. We saved a spot for Karina, and we were able to enjoy the show in my favourite spot in a U2 concert – right in front of Bono. The show was stellar. The band was even more into the last Wembley show, and the rare appearance of Bad made the night special.
August 15, 2009 - London
London, England