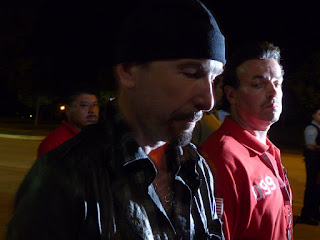 After almost a month without seeing a U2 gig, my friend Chris and I made it into the Windy City to see U2 open their North American leg of the 360 Tour. We got to the queue at 8:30AM the day before, and as anticipated, there were a handful of fans already. It was great to see Brad (DC), Cathal (Derry), Brad (San Fran), Barbara (Lexington), as well as encountering several new people: Roman, Bret, Amy, Dan, Najet, Fran, Angel, Jim, Trevor, Adam, and many others who I was happy to meet for the first time. We were able to meet the band after their rehearsals the night previous. Getting into the venue was hell – Monterrey Security had no clue what was going on. The biggest farce was seeing two incompetent security guys slowly hole punching each ticket – there were over a 1000 people in the queue. Despite this screw up, I was able to make it to front row centre beside Brad, Bret, Roman, Najet, and Chris. I was happy to be around familiar faces. The show itself was a safe one – not too different from what I heard throughout Europe. Although Bad was always a nice edition. I was able to get a setlist at the end of the night, but was pleased to pass it on to Roman who saw U2 for the first time this tour.
September 12, 2009 - Chicago
September 13, 2009 - Chicago