Just got to Vancouver last night, and started the queue this morning. There are only a few of us here, and I hope it doesn’t rain! The U2 crew spoke to us and said we can camp. Will be a cold night. But at least we have a propane heater to keep us warm. 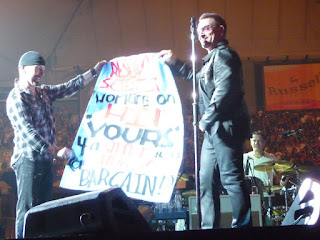 The last show of the second leg of the 360 tour. This was the 15th show I have seen of this tour, and what a way to end it. After the Vegas experience, I had the confidence to run the queue on our own, with the great help of Chris, Tri, Jas, Dino, Debbie, Salvi, Bryan, Stefan, and John. Overall, the queue was smooth and calm. Being the first in the queue had put me in a rather awkward position of also having to conduct some interviews with the media about how and why we lined up for so long.

On this trip, I took Chris, John, Amber, Bren, Sheryl, Bryan, and Niki into the GA and we were able to enjoy the show front row centre.
The show itself was energetic. Black Eyed Peas were an awesome opening act. I will miss their high impact intro. The band played a rather standard setlist, but the emotions in the songs and interlude were prevalent. Bill Gates was in the crowd, and we sung him happy birthday. In the end, I was able to get Bono’s setlist which is a nice souvenir and appropriate way to end my 2009 U2our.

Vancouver, Canada
Here We Are Again...