Setlist: Return of the Stingray Guitar, Beautiful Day, New Year’s Day, Get On Your Boots, Magnificent, Mysterious Ways – Private Dancer, Elevation, Until the End of the World – Singin’ In The Rain, I Still Haven’t Found What I’m Looking For, Angel of Harlem, Bad – Singin’ In The Rain, In a Little While, Miss Sarajevo, City of Blinding Lights, Vertigo – It’s Only Rock and Roll, I’ll Go Crazy If I Don’t Go Crazy Tonight (remix) – Relax – Life During Wartime, Pride, MLK, Walk On – You’ll Never Walk Alone, One – Rain, Where the Streets Have No Name, Hold Me Thrill Me Kiss Me Kill Me, With or Without You, Moment of Surrender – Singin’ In The Rain

Comments: The video screen requires some minor repair right before the show begins, but that doesn’t slow down another terrific show. Nor does more rain, which leads to several weather-related snippets. Angel of Harlem is played for the first time since July 25, 2009. And Bad reappears for the first time since Sept. 12, 2009. Bono praises Joe O’Herlihy — today is the 32-year anniversary of his first concert as U2’s sound man. With or Without You includes a bit of the rare ‘Shine like stars’ coda. 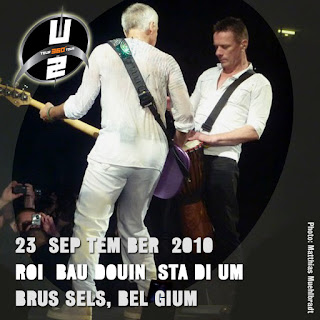