Setlist: Return of the Stingray Guitar, Beautiful Day – Here Comes the Sun, I Will Follow, Get On Your Boots, Magnificent, Mysterious Ways – My Sweet Lord, Elevation, Until the End of the World – Anthem, I Still Haven’t Found What I’m Looking For, Mercy, Bad, In A Little While, Miss Sarajevo, City of Blinding Lights, Vertigo – Highway to Hell – Devil Inside, Funky Town – I’ll Go Crazy (remix) – Relax – Two Tribes, Sunday Bloody Sunday – Get Up Stand Up, Scarlet, Walk On – You’ll Never Walk Alone, One, Amazing Grace – Where the Streets Have No Name, Hold Me Thrill Me Kiss Me Kill Me, With or Without You, Moment of Surrender

Comments: Bono starts the show by mentioning a couple times how great it is to be in Melbourne. (When U2 played its most recent show here in 2006, Edge mistakenly said thanks to Sydney when leaving the stage.) Jay-Z joins the band and raps during Sunday Bloody Sunday, just as he did at the first Auckland show, but does not stay on stage for Scarlet. Edge struggles through some guitar difficulties during the show, sometimes having to ditch his wireless setup for an old-fashioned wired guitar in the middle of songs. Natalie Imbruglia, who sang with U2 during the ‘Tribute to Heroes’ telethon in 2001, is at the show. 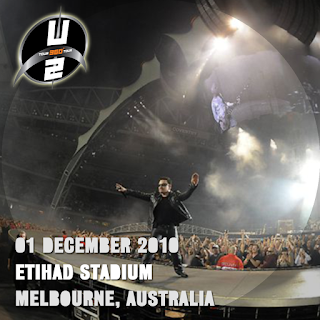