Setlist: Beautiful Day, I Will Follow, Get On Your Boots, Magnificent, Mysterious Ways, Elevation, Until the End of the World, I Still Haven’t Found What I’m Looking For, North Star, Pride, In A Little While, Miss Sarajevo, City of Blinding Lights, Vertigo – She Loves You, I’ll Go Crazy (remix) – Two Tribes – Relax, Sunday Bloody Sunday, Scarlet, Walk On – You’ll Never Walk Alone, One, Amazing Grace – Where the Streets Have No Name – All You Need Is Love, Hold Me Thrill Me Kiss Me Kill Me, With or Without You, Moment of Surrender

Comments: Instead of Space Oddity, U2 takes the stage to the Get On Your Boots (Rainbow People Remix), then starts the show with Beautiful Day.  Legendary South African trumpeter Hugh Masekela joins the band during I Still Haven’t Found What I’m Looking For. But the night belongs to Nelson Mandela on the 21st anniversary of his first public rally after being released. Pride (In The Name Of Love) includes a videotaped speech by Mandela, and several other mentions included Bono dedicating Moment Of Surrender to him. In light of recent news, the video screen shows images of Egypt and Tunisia during Sunday Bloody Sunday. The band performs Scarlet, but Bono talks over the song instead of singing ‘Rejoice’. 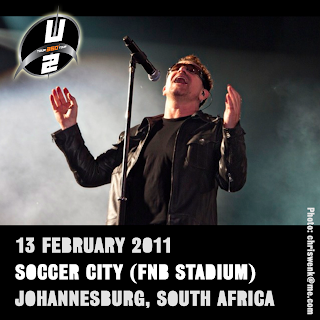