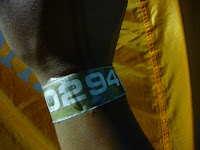 After my experiences in São Paulo, I learned that the Latin American fans were incredibly passionate as demonstrated by their ability to queue up for days.  I flew into Mexico City on Saturday, May 7, met up with my friend Pat at the hotel, and grabbed a bite to eat.  Immediately, afterward, we made our way to Estadio Azteca to begin camping out.  I was number 294 in line by the time I got there – five days before the show!  This was a new record for me – a four night stay in the queue (eclipsing my two night stay for São Paulo III).  Security was quite tight at this venue, and perhaps for our benefit considering the neighborhood we were in.  First, you need to pass an initial checkpoint who will see if your ticket is a GA.  Then you go through a blue tent that scans your ticket, assigns you a wristband with a number on it, and then writes the number on the back of the ticket.  Finally, you go through a bag check to ensure you are not smuggling any alcohol or contraband into the queue.  Once in, you can pitch your tent and stay in line.  If you wish to leave, you must have your ticket on you, and show them that your wristband corresponds with the number on the back of the ticket.  Next, they rescan your ticket, and then leave the initial checkpoint.  It was an arduous and redundant process.  But if there is anything I’ve learned on the road with U2, you abide with whichever queue rules are in effect. 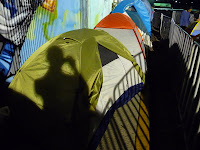 Needless to say, I was glad to have invested in a tent.  After Brazil, my body couldn’t muster a multi-night stay in the pouring rain.  Despite the long days, we were able to slip away in the afternoons to shower, change, and get something to eat.  While we were warned that the area outside of the stadium was sketchy in the evenings, during the day, there were bustling markets four blocks down from where we were camped and enjoyed some amazing gorditas and freshly cut mangoes.  On Tuesday, Amp, Pat, and myself had enough time to check out the Historical Centre, and see some wonderful paintings by Diego Rivera in the Palacio Nacional.  Unlike Europe and Anglo/French America where we queued up for usually one night before the show (and therefore were compelled to not be away from the line too long), it was common for people in the line to leave for long lengths of time to do their business.  While public transport was extensive in Mexico City, it did take a while to get around because the city was so massive.

The people we met in the queue were very friendly and we enjoyed their company immensely.  A big thanks to Samantha,  Gustavo, Raúl, Pablo, Oscar, Omer, and the rest of Mexicans that were in proximity to our tents and made our stay in the queue a lot of fun!  I was also lucky to meet Fernando (Fer), (a friend of Nick), for helping us understand the local customs and expectations of a Mexican queue.  It was also great to meet Jorge (from San Fran), who also helped us manage our way around Mexico City.  Really great guy and will link up next at the Seattle show.  It was also nice to meet up with Amp who flew in from NY for the first show.  I hadn’t seen him since the Brazil shows, so it was nice to see a familiar face!

By the morning of the first show (Wednesday), the security demanded we put our tents away at the inhumane hour of 5AM.  To beat the rush, we began packing up at 3:30AM and stored our stuff with Fernando.  Being tired, I took a nap on the concrete for an hour, and prepared for the long day.  12 hours later, at 3:30PM, the security let us in through the gates and literally walked us into the pit.  Not as exhilarating as the run into Estadio Morumbi in Brazil, but certainly safer given the slope of the tunnel to the pitch.  I noticed that the Mexican fans condensed themselves in the middle of the put in front of Bono, leaving much space on the side rails.  Pat was first in the put and grabbed a rail position in front of the Edge.  In my opinion, having a rail position is important for shows where the venue makes you wait for a long time before the show starts.  In our case, we had to wait for five hours before Snow Patrol came on, so having rail to lean on made it slightly more comfortable in lieu of U2. 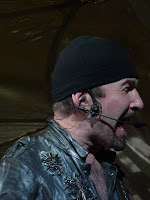 As for the show, I’m convinced that Even Better Than The Real Thing is a great opener.  Larry’s base is so deep and loud, it’s hard not to be enveloped by the beats and get pumped for the show.  As we know, it was Bono’s birthday the day before, so we expected a festive mood.  Prior to I Still Haven’t Found What I’m Looking For, we broke out in song and sung Happy Birthday to Bono.  Edge helped out and led the celebration.  No champagne I’m afraid.  Having heard it first in São Paulo, Zooropa has turned out to be one of my favourite songs on the tour.  It’s trance-like intro, hypnotic lyrics, and dark presentation compliments well with the openness of City of Blinding Lights.  It was clear that the band juxtaposed the two songs to demonstrate the emergence from dystopia into the brightness of the future (à la Future Needs a Big Kiss).  As part of the multiple political narratives, Bono highlighted the hypocrisy of United States media and governments for over-reporting the drug problems associated with Mexico but failing to mention the number of guns illegally smuggled from the US that has fueled the bloodshed in Mexico.  It was also evident that the band needed some more rehearsal time because Bono botched up lyrics to the newly arranged Magnificent (which was a pleasant surprise) and the standard bearer song One. 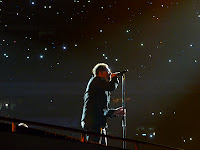 Another highlight of the show was Moment of Surrender when Bono asked for the stage lights to be turned off and Azteca to be turned into the Milky Way.  Unlike other stadiums where the seats are spread further back, this historic stadium reaches into the sky.  So high that it’s even higher than the claw itself.  In 360 degrees, high-on-up, there are glittering lights all around that I had never seen at other shows, including Camp Nou.

We left that unforgettable night back to grab a bite to eat at our favourite Mexican restaurant La Casa de Toño before crashing at the hotel.  The stadium wouldn’t allow us to camp out again after night one (even though I was prepared to do so).  Nevertheless, it was nice to crawl back into a bed for the next two nights before going back to the queue for the weekend shows.

My pictures from the queue and show are available here.
Bootleg recording of the show to be uploaded soon.