Immediately after the first show, we wanted to see if it were able to camp out right away, which I was fully prepared for.  We were told to come back Friday evening.  I guess the venue wanted smaller numbers of those who were staying overnight.  Until then, they would allow us to get wristbands and join the other people in the queue who had already been camping out a week before hand.  We checked again Thursday morning, and the venue told us no new camping.  With that situation in mind, Pat and I had a free day to site-see.  We checked out the highly recommended Anthropology Museum which was spectacular.  I really enjoyed the exhibits that covered the pre-colonial history of Mexico.  I was mostly impressed by the Aztec exhibition.  If you haven’t been to Mexico City before, the Anthropology Museum is worth the visit!

If there was another thing I’ve learned from the Mexican queue, rules change every day, if not every hour.  Friday morning, we got a text that our friend Brad had just flew in from San Francisco and was making his way to Estadio Azteca.  He immediately got our names down on the fan-run unofficial GA queue lists for the weekend shows.  I was number 463 for Saturday and number 71 for Sunday.  We got to Azteca at 10AM, and unsurprisingly, there are hundreds of people queuing up off stadium grounds even though the ‘official’ word was that they wouldn’t let us in until 8PM.

Realizing that there was a critical mass of fans gathering outside, the venue wristbanded us and let us in at noon.  Pat went back to the hotel to collect our tents so that we had shelter that evening.  Brad and I stayed in the queue for most of the day, and I left for two hours in the evening to shower and change knowing that it wouldn’t be for another two days when I can do that again.  By 4AM, we had to pack our things, and Pat and Jorge were kind enough to return our bags to the hotel.  With nothing more than my well-traveled side-bag (in it – my survival bag to sleep in after the show, a spare t-shirt, and some granola bars), I had all I can’t leave behind for the weekend.

The day of the show wasn’t too bad.  We made friends with Raphael and Yvonne in the queue – a very kind couple from Mexico City.  Yvonne was lovely to offer a place to stay should I return to Mexico City, which I may take up because I really enjoyed the city and the people!  Given our far position in the queue, and knowing that most Mexicans wanted to be in the inner circle of the pit, we decided to go for the outside rail – the first time I’d been there this entire tour.  I had heard its virtues from other fans but had never been there myself primarily because I had spent so much time on the outside rail in arenas during the Vertigo Tour. I had never won the ‘lottery’ to get in, so I have a rather bitter association of being on the outside rail for failing to win the ‘lottery’. 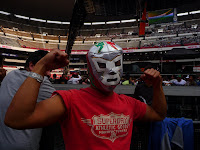 To be honest, it wasn’t that bad to be on the outside rail.  The Mexican fans around us were a lot of fun!  Thanks to Cesar for letting me pose with his Macho Man wrestling mask!  Having fun fans around make the wait in the pit a great experience.  Moreover, since we had to wait for five hours before Snow Patrol came on, having a rail to lean on makes the wait more tolerable.  If someone was to only see one show on the U2 tour, I would recommend outer rail because you get to see the screen in its full glory, and still see the band members up close when they come around.  However, after enjoying the outer rail, I openly admit that my spiritual U2 home was along the front rail. 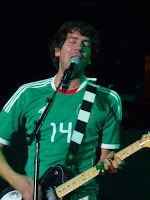 With respect to the show, it was another special one.  I can’t say enough how amazing Azteca is as a concert venue for the 360 tour.  Unlike Wednesday’s show, which was the third show put on sale after the first two sold out, Saturday night was packed to the rafters.  Over 110,000 fans for that sold-out show.  My friend Cathal, who has been to every city on the tour, has a strong claim to say that Mexico City has the loudest fans by function of culture and sheer size of the stadium.  Snow Patrol were a great opener.  I’ve seen them several times, and I appreciate the effort they put into getting the crowd pumped.  Although I am not a Man United fan, I respect the impact of Javier Hernandez (Chicarito) has had in the English Premier League.  He had just scored the goal that secured Manchester’s league title.  As such, Gary Lighbody (being a Manchester fan) wore Chicharito’s national jersey in his honour.  The Mexican fans loved the gesture and chanted “Chich-a-rito… Chich-a-rito…”! 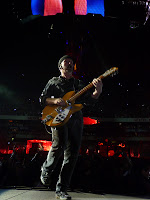 Thirteen years ago that night, Frank Sinatra had passed away.  In homage to Sinatra, Bono sung Strangers in the Night to great effect after Until the End of the World.  It’s moments like these – rare snippets – that make shows special for us multiple concert goers.  Another highlight of the show was hearing Desire once again.  I remember the sing-along part when I was at the Barcelona show at the start of the tour, and craved to hear the same volume and dedication to the lyrics of this Rattle and Hum classic.  I wasn’t disappointed to hear the Mexican fans singing the chorus to Desire. 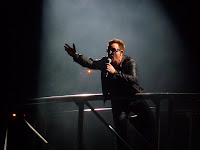 To boot, it was a pleasant surprise to hear Stay (Faraway, So Close).  Although English was not their first language, I was amazed that the Mexican fans sung along to every U2 lyric with gusto.  This linguistic phenomenon, of non-English speaking fans being to sing the English lyrics of U2, has always blown me away.  Hearing Discotheque added to the end of I’ll Go Crazy Tonight was another highlight, particularly the guitar riff that Edge adds at the end.  We don’t get a lot of Pop material, but when we do, it’s a precious moment. 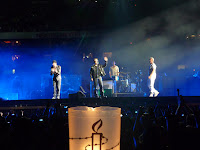 Near the end, it was nice to hear Ultraviolet make a reappearance.  It is a funky song that can get the crowd bumping before the climatic end of Moment of Surrender.  I’ve always loved Ultraviolet, and am gutted that we don’t get to hear it often enough.  It is understandable that U2 wanted to change the set list from what we were accustomed to from the first North American leg.  As such, going to a city that has multiple shows allows us to hear Ultraviolet at least once.  This helps justify my trips to Anaheim and Montreal for the remainder of the tour.

Right after Moment of Surrender finished, Brad and I jetted out from the rail to make it back outside of the venue to reclaim our spots in the queue for the following night.  It wasn’t until 3AM when the venue wrist-banded us and let us onto stadium grounds to sleep.  Once in, I unraveled my orange survival bag (used mainly for hiking survival), and with no inflatable mattress, went fast asleep ont he concrete to prepare for the third and last show of Mexico City.