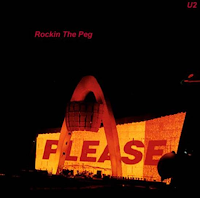 This was my hometown show.  I had grown up just a few blocks away from Canad Inns (Winnipeg) Stadium, and had missed the last time U2 were in town, which was June 12, 1997, just after the flood of the century.  I wasn’t the mega-fan then as I am now.  I only started to get into U2 after joining student council at the University of Manitoba, and my friend Chris continually played the VHS tape of U2’s Zoo TV Live from Sydney.  There were other U2 fans on council – Shal, Eddsel, and James – who openly promoted the virtues of U2.  I also credited the Santiago, Chile Popmart Tour bootleg recording that James had lent me as a milestone.  I admired U2’s invitation of THE mothers of the disappeared to come up on stage before their song, and announce the names of their lost sons and daughters and the dates they went missing.  I fell in love with U2 then, and it took three years of listening to live material before I actually saw U2 in concert for the first time on May 1, 2001 at the Target Center in Minneapolis.  We had nosebleed seats, and saw all the people in the ‘heart’ or inner-pit having a great time.  My friend Chris and I (along with Eddsel) were committed to seeing U2 in the pit the next time we saw them.  We found tickets for the May 28, 2001 show at the Molson Centre in Montreal, Canada, and made it front row centre.  Since that Montreal show, I haven’t looked back – the GA was where I belonged!

A Sort of Homecoming

Ten years and 47 U2 shows later, I’ve come back to Winnipeg (Canad Inns) Stadium, to see U2 play in my back yard.  I arrived in Winnipeg Friday night and met up with my friends Cathal (from Derry) and Chris (from Winnipeg).  Having heard that U2 rented out the Walker (Burton Cummings) Theatre to film a documentary for their Achtung Baby Re-Master, we bee-lined it to the venue to meet the band.  At around 7PM, Edge came out to shake everyone’s hand, but I was too slow to catch up to him and was crowded out.  Next came Adam, and I headed towards him to say hello and shook his hand. With a smile, he returned the salutations, and went over to the rest of the fans.  Larry was not to be seen, but to be fair, he is the toughest band member to meet.  Then a black SUV rolled up and a few minutes later, Bono steps out and the crowd cheered.  I waited patiently for my turn, and when he faced me, instead of asking for a photo or an autograph, I just introduced myself, and thanked him for being a source of inspiration, particularly for my social research on poverty reduction.  He was really interested in that aspect, and asked where I worked, and told him in Edmonton, and that I looked forward to seeing the band play there in a few days.  It was rather surreal to chat with someone you admire and respect at such a level, but I took great comfort knowing that he takes the time to talk to his fans.  This was a highlight, and it happened in Winnipeg of all places, my hometown. 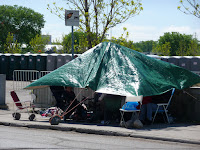 My friend Tri, who I had met at the Vancouver 2009 queue, started the line Friday night (day before the show) after seeing the band at the Burton Cummings Theatre.  I was too tired and felt it was unnecessary to queue up for two nights, particularly for Winnipeg (a very low key city).  I’ll reserve the multi-night queues for Latin America where long days of queuing up is part of the concert experience!  Partially rested (I never ever get full sleep when there is a U2 concert is involved), my sisters, Chris, and I made it down to Canad Inns Stadium at 6AM, met up with Tri, and got our names down in the GA book.  Security had been incredibly supportive and the lines of communication were wide open.  I gave them an A+ for their work.  They didn’t allow camping, and I asked them to define ‘camping’, which essentially meant no tents.  Instead, we set up a tarp, that pretty much resembled a tent, and it was big enough to fit lawn chairs, and inflatable mattresses to sleep on.  It was luxury for a GA queue.  Tornado warnings kept popping up on the weather forecasts, but none materialized, luckily.  Dark clouds rolled over us and it only rained once for a two hour period.  After that, we were pretty much dry.  Darryl and Jonathon had brought along a BBQ.  We were able to relive our Vancouver queue experience and had side walk cook out and enjoyed BBQ sausage and burgers!  The sleep over night was fine.  It’s amazing how an inflatable pool floatie and a sleeping bag can do to make it for a comfortable rest.  We woke up the next morning at 4:30AM to prepare for the non-campers to arrive for the 5AM role call.

It was an unseasonably cold late-May day.  It got to a low of 8 degrees Celsius in the evening, but the wind made it to be an uncomfortable wait in the queue.  By 6AM Sunday morning, we made sure everyone was lined up and accounted for, and we all walked over to the stadium grounds into the fenced-in areas.  Kim, head of the security detail looking after us, was helpful as always, and gave us as much information as she knew.  We appreciated her openness and cooperation.  Buying merchandise was easy, as it was available just around the corner from where we were queued up.  There weren’t many people in line.  By noon, there were maybe 250 people.  By 3PM, we were asked to put our belongings away, and at 5:30PM, all 550 of us were let into the stadium.  Canad Inns Stadium was one of the smallest venues I’ve been to in North America, and the field felt a lot more cramped.  So the walk in was quite orderly and easy.  Didn’t have to loose any breath to get into the pit. 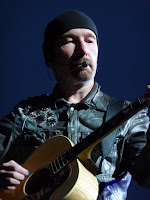 I was the first one in the pit and was really happy that all the people we hung out with in the queue got a front rail position.  There always seems to be an injustice if those who had camped out over night were squeezed to the back of the pit.  But all I saw were happy faces along the rail and that made it extra special.  It was my friend Mark’s (from Toronto) birthday that day and had told Bono earlier that he would be wearing his Mirrorball Man 2.0 costume during the show.  Sure enough, he had his silver jacket and mirror ball helmet ready to go for the show.  Bono spotted him during ‘One‘, and gave a shout out (and on his birthday no less)!  Early on, Bono did his best to lift the crowd and get them on their feet.  Songs like ‘I Will Follow’, ‘Elevation’, ‘Vertigo’, and certainly ‘Where The Streets Have No Name’ did the trick.  The crowd went wild when ‘With Or Without You’ was played, because it was such a familiar song and the stage is at its full lighted glory. 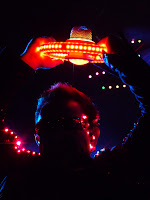 There were a few bumps in the show that is only noticeable to the avid concert goer.  The neat video intro with Desmond Tutu failed to show up on the screen above before ‘Magnificent‘.  I really liked the video and was too bad that Winnipegers didn’t enjoy its captivating imagery of the world being connected and a ghostly Tutu pronouncing the good nature of interconnectedness.  Bono missed a few chorus words during the newly arranged ‘Magnificent, but he admits it is still a work in progress.  ‘The Edge was having difficulty with tuning before ‘Stay (Faraway, So Close!)‘, probably because of the cold wind affecting the strings and tuning.  Adam looked miserable at times on stage, but we all concluded his appearance and awkwardness was due to the wicked cold wind blowing through the stadium.  He had a pair of cut off gloves on his right hand, but that wasn’t enough to keep his fingers warm! The biggest omission was ‘Moment of Surrender’.  I noticed Bono giving his thank yous and ‘bring out your cell phone’ speech way too early and during ‘With or Without You’.  It appeared rushed, and to some disappointed die-hard fans, the closing song was left out maybe because the show ran past 11PM (curfew?). 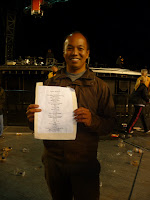 But the local dailies gave the show glowing reviews – The Winnipeg Sun (5.0/5.0) and the Winnipeg Free Press (4.5/5.0).  As die-hard fans, it’s important to be more reflexive and qualify our assessment of a U2 concert.  We are an odd bunch.  We see dozens of shows and our expectations are just set too high.  For the audience member who only saw this show once, I’m happy to know that they largely walked away satisfied and blown away by the production.  My Mom had never seen U2 live before, but ended up loving the show, and my Dad wished the guy in the seats ahead of him sat down so he could view the show.  I reminded him that people usually stand for a rock concert, especially for the world’s biggest band!  It was kind of Phil (Bono’s roadie) to give me a setlist (Larry’s) given that this was my hometown concert, the one I had been waiting for over 10 years.  I was kicking myself that I wasn’t a fan when U2 were last in Winnipeg, but I think I made up for in the meantime.  Next show – Edmonton – my surrogate hometown!

My queue and concert pictures are available here.