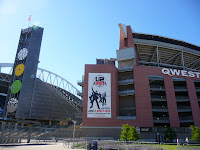 This was the third U2 show in a week for me — in a different city.  I had gone from Winnipeg > Edmonton > Seattle.  I worked on the Monday, Thursday, and Friday; making it a complicated week.  The last time I attended a string of shows without much of a break was during the first leg of the 360 Tour, when I went to Chorzow (Poland) > Zagreb (Croatia) 1 & 2 > London (UK) 1 & 2 all in a row.  What made this a difficult week was managing the queues for Winnipeg and Edmonton, which takes a lot more energy than simply being a part of the GA line.  Seattle was special for me because it marked the 50th U2 concert I’ve seen (28th on the 360 Tour).  I had been to Seattle before – it was the first show I saw on the Vertigo Tour, where I had gone on to travel in Europe and North America and ended up seeing 19 shows on that tour.  I returned to a beautiful and sunny Seattle, with a big smile on my face.

Despite the lack of sleep and extensive travel, these stresses have never stopped me from going to a U2 show before!  I had to work Friday all day before catching a flight over to Seattle in the evening.  My friend Brad (from California) had been communicating with me all day regarding the status of the GA.  I was a little worried that I wasn’t in line with everyone just yet.  Luckily, everyone in the front of the queue knew me, were waiting for me to get in, and saved a spot in line.  I never asked them to save a spot, and felt that it violated my unwritten code of ethics to the queue, but they insisted I join them.  I was happy to help manage the queue overnight in order to make a contribution to the group.  When I took the light rail into the city from the airport, I eventually found everyone and was really happy to see all my old US U2 friends – people I hadn’t seen since the Las Vegas show.  Most didn’t make it over to Australia, South America, or Mexico, so it was nice to see them after such a long period time.  These were vintage U2 fans from the United States, and were some of the nicest people I’ve met on tour — well, the vast majority of people I meet in line are amazing individuals.  It was also great to see Yolanta and Rob from Vancouver again.  I haven’t seen the two of them together at a show with me since the first Vancouver gig during the Vertigo Tour.  I was also excited to see Brad and Jorge again.  We had some good times in Mexico City, and I somehow felt that the challenge of a Mexican queue made us closer (and stronger) as a result.  You haven’t survived a U2 queue until you make it through Mexico City – a week in line for multiple shows, with some of the most animated and intense fans, in order to make it into one of the biggest and historic stadiums in the world.

The line itself was for the most part intact and well behaved.  There were a lot of kind and approachable fans in the queue, and I enjoyed walking down the line with Jorge explaining what was going to happen throughout the day in so far as wrist-banding and gate entry procedure went.  At 1PM, the venue staff checked tickets and issued wristbands to all GA ticket holders (much appreciated).  By 3PM, we were asked to put away our chairs and umbrellas.  Come 5PM, we went through bag check, ticket scan, and moved our selves onto the stadium grounds.  We waited and listened to U2’s sound check.  Whenever Beautiful Day was played, I couldn’t help but feel our heartbeats race along with the song in anticipation of the walk/run onto the pitch.  Then we were given a nice treat.  U2 played a full version of The Fly!  I loved it, but was skeptical that they would actually bring it out during the show.  I was thinking, ‘It’s another teaser like Drowning Man!”  Needless to say, The Fly wasn’t played, and was probably a rehearsal to prepare for their Glastonbury appearance.  Nevertheless, it was nice to hear something different compared to the standard issued set list we’ve been hearing ever since Denver.

When the gates opened, we were escorted through the impressive Qwest Field onto the pitch, where Brad and I hustled through the cattle gates and ran to our preferred front-row-centre positions.  Jorge quickly joined us, and I was relieved that we were united at the front and were able to enjoy the show together like old times!  My good friend Bryan (who was further back in the queue with his brother-in-law Craig, and his niece Mackenzie) was just behind me as we had planned.  I think it’s vital to enjoy the show with family and/or friends.  Bryan lives in Vancouver and was eagerly anticipating the scoreline from the Stanley Cup final between Vancouver and Boston.  A Canadian team hasn’t one the Stanley Cup since 1993, so a lot of us Canadians wait for the day for the trophy to return to our country.  Vancouver won in overtime 3-2 to take a two game lead in the series :) 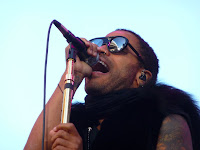 After waiting for an hour and a half, Lenny Kravitz took the stage.  I’ve always like his material, particularly his mercurial album – Are You Gonna Go My Way.  I’ve seen a lot of U2 concert openers in my time – Kings of Leon, Keane, Pearl Jam, Muse, Snow Patrol, Black Eyes Peas, and Jay-Z.  But I have to say, Lenny Kravitz was the best opener I’ve seen.  He didn’t have the evening sky to get people in the mood, nor did he have the assistance of a laser show to get the crowd into the concert.  It was his pure charisma and rock talent that got the entire stadium on their feet.  Songs like Let Love Rule, American Woman, Fly Away, and Are You Gonna Go My Way were stadium anthems.  It was so much fun to sing and dance along.  I look forward to seeing him live again at both Anaheim shows. 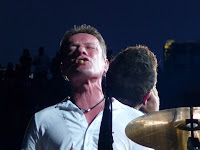 U2 came on shortly afterward and they were electric as usual.  I still love Even Better Than The Real Thing as the opener – a song to be experienced in the pit.  The visuals for Magnificent failed to appear again, but that did not detract from the performance or quality of the song.  Opinion is split among U2 fans on the new Magnificent arrangement.  I like it myself, perhaps because it’s different and that I am craving for a bit of change from the norm developed over the tour.  Zooropa is my favourite song on the tour so far because of its poetic narrative and trance like departure from the rest of the songs on the set list.  Unlike Edmonton, the screen did come all the way down, but U2 did not wear their cool LED jackets.  Many of us die-hard fans wish for their return because of their funkadelic, futuristic look, and out-right weirdness! 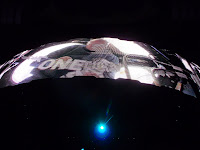 The highlight of the night was Beautiful Day.  I’ve heard this song several times, but again, the context changes the complexion of the song.  On this evening, Commander Mark Kelly made an appearance from the International Space Station on the screen and replaced the the part when Bono invites a female on stage to read a poem before the song commences.  When Bono asked him what’s on his mind, Commander Kelly appropriately echoed the lyrics from Space Oddity, “Looking forward to coming home, tell my wife I love her very much… she knows.”  It was an unbelievably poignant moment.  Kelly’s appearance was classic U2 — finding a way to connect with their fans at a deep and emotional level.  As Bono correctly proclaimed, “These people are heroes.”  I couldn’t agree more.

In case you are unaware, Commander Kelly is the husband of Congresswoman Gabrielle Gifford who was the target of a horrific assassination attempt on January 8, 2011 in Arizona while having a public meet and greet with constituents.  She barely survived, but 6 others died from gun shots – including a 9-year old girl.  I remember this event clearly because political violence in the south is something we would think was a thing of the past.  The violence that happened that January day struck at the core of my political awakening — when I first became aware of the circumstances of Martin Luther King’s murder.  Violence has no place in a democracy, or any polity for that matter.  Hearing Commander Kelly recite the lyrics at the end made me tear up because they reflected the optimism required to move on after violent events.  How else can we move on if we can not draw from the redemptive aspects of humanity?
See the world in green and blue
See China right in front of you
See the canyons broken by cloud
See the tuna fleets clearing the sea out
See the Bedouin fires at night
See the oil fields at first light
And see the bird with a leaf in her mouth
After the flood all the colors came out 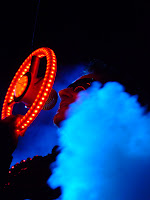 The rest of the show continued according to script and was not disappointing.  Hearing Carole King’s Will You Still Love Me Tomorrow? was another treat, with its contrasting lead into Where The Streets Have No Name.  With Or Without You was another stadium highlight, as well as the closing song (my favourite) Moment Of Surrender when everyone “whips out their cell phone to recreate the Milky Way.”  It’s a rather majestic way to end the concert. The lighted stadium, mimicking the stars, is fitting considering the space theme and philosophy of the tour.  We are all children of the stars – literally.  I like the idea, because I am able to walk away from the show knowing that the universality of this physical proof binds us from the past and into the future – we are in fact One:
One love
One blood
One life
You got to do what you should
One life
With each other
Sisters
Brothers
One life
But we’re not the same
We get to
Carry each other
Carry each other
One life…
My photos from this concert is available here.
Seattle, USA
Oakland, USA